Professions, like the law and counselling, often encourage their members to give back to the community.  Butterfield Law has supported a variety of charities since Michael Butterfield was called to the bar in 2001.

Michael Butterfield does not just “talk the talk” he also “walks the walk”- or run as the case may be.  A Cancer survivor himself, Michael recently ran/walked 26 kilometers to raise money for colorectal cancer, highlighted in the Times Colonist March 7, 2021.

In 2009 and 2014, Michael Butterfield participated in the Royal Victoria Half-Marathon to raise funds for Santa’s Anonymous.  Santa’s Anonymous is a Victoria based charity which provides assistance to low-income families at Christmas and throughout the year.  He asked friends and colleagues to donate $1 per km, and raised over $2000 in 2009, and $3000 in 2014. 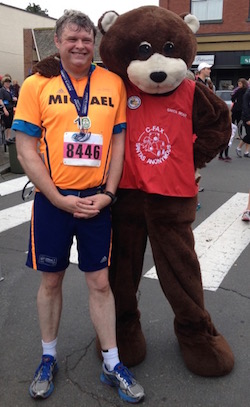 Michael Butterfield and Santa Bear after the Royal Victoria Half-Marathon in Oak Bay.

More recently, Butterfield Law has been an official sponsor of the Canadian National Institute for the Blind (CNIB) “Eye Appeal” fundraising event (2013 & 2015).  He also served on the Eye Appeal board.  Money raised went to specialized camps for blind and partially sighted children and youth, services and equipment for CNIB clients.

Butterfield law supports charitable initiatives both far and wide.  On a global level, Mr. Butterfield supports Water Aid which delivers water, sanitation and hygiene to those most in need.  Water Aid also works to assist governments across the world to provide citizens with affordable, sustainable services.

Locally, Mr. Butterfield donated to initiatives by Friends of Fern Street Park, which is in the North Jubilee Neighbourhood where our offices are located.  This community raised money for new playground equipment.  He has even supported the local Victoria Legal Support Staff Association (VLSA).

This year, Butterfield Law is supporting The Parkinson’s Superwalk.  This fundraising walk takes place September 10, 2016 in Esquimalt B.C.  Funds raised through this event help PSBC to provide valuable support services and education, and fund research for the 13,300 British Columbians living with Parkinson’s.

Charitable contributions are part of the vision for Butterfield Law, in giving back to the community.  When we see a cause we believe in, we are motivated to chip in.

When choosing a charity to support, Michael Butterfield recommends checking the “Charity Intelligence Canada” ratings. This organization rates non-profits, and charities, based on the charity’s disclosures, staffing costs, social results, and financial transparency.  This organization helps to ensure people know where their donated dollars go.

Jayne Embree holds a Masters in Psychology and is a highly experienced Divorce Coach and Child Specialist. She is currently working with the Administrative Department of Butterfield Law.