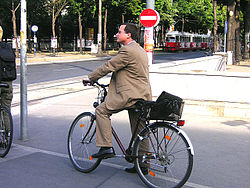 Vancouver  lawyer and cycling advocate, David Hay, says that the current law is unfair to cyclists.

He is calling for the B.C. government to change its current road use law, the Motor Vehicle Act. He wants  renamed “The Road Safety Act”. His goal is to focus on all road users.

“The name itself is biased”, said Hay.  “It’s inherently favourable to people that aren’t vulnerable road users, cars in particular.” The Motor Vehicle Act is unfair to cyclists.

The new Act would include all users of the roadway, and is safety oriented.  There are four main ways that Hay would like clarified in an updated law:

1.  Fines, and possibly demerit points, for drivers who open doors onto cyclists.

2.  Allowing cyclists to ride side by side on the roadway, under some circumstances.  (They are currently not allowed to do so, if they are impeding traffic).

3.  Requiring vehicles to have a minimum passing distance from cyclists.

4.  Clarifying, and potentially allowing cyclists to pass on the right.  (The present Act limits this practice. Although, it is a common practice among cyclists particularly when traffic is congested).

Ontario has recently increased fines for drivers opening doors onto cyclists to between $300 and $1000, plus three demerit points. Hay’s hopes BC will follow their lead.

The current B.C. Motor Vehicle Act, is a renovation of a 1957 statute, that made the rights and obligations of vehicles and bicycles the same.  Hay argues that the current Act does not reflect the modern use of cycles, not only for recreation, but also as transportation (particularly in urban areas such as Vancouver). He views this as inherrently unfair to cyclists.

Hay is a member of the Motor Vehicle Act Legislative Review Committee, that aims to modernize the Act to reflect current use of cyclists on roadways-particularly for daily commuters.

Mr. Hays’ law practice is completely made up of personal injury cases involving cyclists.  In an interview with All Points West (CBC News; June 6, 2015), Hay stated that his proposed changes in the Act would decrease the number of accidents and improve road safety overall. He also wants clarification in the Act as it pertains specifically to cyclists. Hay’s goal is to make the roads safer.

The next steps for the Committee involve:

1.  Making final and formal recommendations on the legislature relating to cycling and road safety.

2.  Getting an MLA to champion the Bill.

3.  Putting the Bill before government.

Jayne holds a Masters in Psychology. She is a highly experienced Divorce Coach and Child Specialist. She is currently working with the Administrative and Human Resources Departments of Butterfield Law.

Current Laws Unfair to Cyclists is based upon CBC reporting.