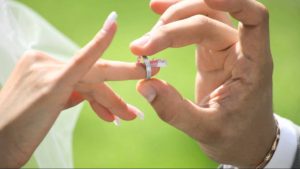 What age is the best to marry and avoid divorce?

Is the ideal time to marry is between 25 and 32 years of age? A recent U.S. survey indicates the divorce risk is lowest for couples marrying in this age range.

University of Utah Professor Nicholas Wolfinger posted his scientific results for divorce risk in the Blog of the Institute For Family Studies. He analyzed U.S. statistics on divorce from the 2006 and 2010 National Survey of Family Growth.

Past studies have focused on the high divorce rates for couples who married in their teens or early twenties.  Wolfinger points out, “Delaying marriage from teens until the early twenties produces the largest declines in divorce risk.” He place the optimal age to be between 25 and 32.

Wolfinger postulated that the following characteristics may account for this optimal age range for marriage (compared to young marriages):

Wolfinger noted a surprising upward trend for divorce in couples married after the age of 32. “This is a big change.  To the best of my knowledge, it’s only recently that 30-something marriage started to incur a higher divorce risk.  It appears to be a trend that’s gradually developed over the past 20 years.”

“Past the age of 32 or so, the odds of divorce increase by 5 percent per year of age at marriage.”

Thirty-something marriages increased in divorce rates even after statistically controlling for education, race, religion, and gender.  Whether the couples lived in rural or urban areas was also not a factor.

What accounts for the increase in divorce rates after 32?  Wolfinger suggested a variety of possible reasons:

Cultural norms in the U.S. and Canada are becoming more accepting of marriage alternatives.  Many couples choose to co-habit, or delay getting married for financial reasons. Choosing to stay single is also becoming more common.

Wolfinger suggests that further research in the field may focus on how people successfully select their partners and how these factors effect divorce risk.