Reaching “the age of the majority” does not end a parent’s obligation for child support.  For parents engaged in a high conflict divorce, this milestone can actually add stress and conflict to the family system. 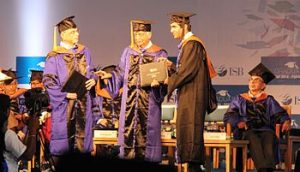 Graduation from highschool can be a difficult transition when it comes to child support.

The legal argument hinged upon the judge’s ruling on whether or not the children, Courtney and Sydney, were still “Children of the Marriage”.

Section 2(1) of the Divorce Act defines a “child of the marriage” as:

“a child of two spouses or former spouses who, at the material time,…

(b) is the age of majority or over and under their charge but unable, by reason of illness, disability or other cause, to withdraw from their charge or to obtain the necessities of life;

In this case, neither of the twins was employed, and neither attended college or university. Sydney was responsible for caring for her own child, whom she gave birth to in January of her grade 12 year.

Ms. Butler opposed the termination of child support, and also sought financial compensation for  a variety of expenses from Mr. Zwack.

These are the items the parents fought over:

The Honourable Madam Justice Hyslop determined, in her Reasons for Judgement (September 8, 2015), that Sydney was no longer a child of the marriage essentially because she was not pursuing post-secondary education.  Accordingly, the father was no longer required to pay the mother child support for Sydney.

In the case of Courtney, Justice Hyslop determined that she was not a child of the marriage for the time period after her birthday and the summer following.  In the event that Courtney was accepted into a training program, and attending that training program, her father would be required to pay $900/month child support directly to her (not her mother).

Both Courtney and her mother were expected to contribute to her post-secondary education.  Moreover, the father did not have to pay child support if Courtney did not provide evidence of her meeting the pre-requisite courses for the training program, as well as a certified copy of her acceptance into the college.

When Does Child Support End?

Child Support Guidelines are determined with the assistance of the Divorce Act and Family Law Act.  Child Support amounts can be negotiated or mediated between parents without going to court.  This allows families to make a child support plan that suits their individual circumstances.