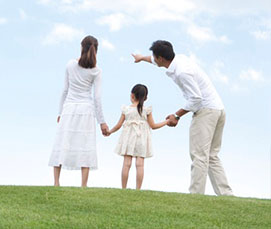 However, Many divorced parents worry that having children shuttle between homes can be stressful for their children.  However, a newly released Swedish study of of nearly 150,000 tweens and teens has found that children with a shared parenting arrangment actually cope better than those who live with only one parent.

Malin Bergstrom, of the Center for Health Equity Studies at Stockholm University and the Karolinska Institute, examined psychosomatic health symptoms in children.  She and her colleagues compared children’s self-reported ratings of health problems for children in divorced families with a shared parenting arrangment, divorced families where the child lived mostly with one parent, and non-divorced families.

Bergstrom and her research team reviewed survey data from a study carried out in 2009, or 147,839 Swedish students in sixth and ninth grade.  The researchers noted that:

Children who had the benefit of regular contact with both parents reported less symptoms. Children in homes with two parents coped best.

In a statement to Reuters, Bergstrom said, “It was surprising that children who move frequently and have two homes experience less stress than those in one stable setting.  We have looked at quality of life, health, and mental health and it seems like both children and parents fare better when children are taken care of alternately by the parents after separation.”

The children’s satisfaction with their material resources and parental relationships was also generally associated with better psychosomatic health.

Some factors which could account for differences between the two divorced family sub-groups may include:  socioeconomic status, a more amicable divorce, or better communication between parents.  These characteristics were not factored out in the shared parenting study.  Data on the age of children at the time of their parents’ separation was not included in the survey.

“Sometimes shared parenting is not possible because the separated couple does not have the financial resources to operate two comparable homes” said Victoria family lawyer Michael Butterfield. “Also as children get older, their desire for independence replaces their need for time with both parents” continued Butterfield.

Bergstrom et al. concluded, “Longitudinal studies with information on family factors before and after the separation are needed to inform policy of children’s postseparation living arrangements.”